1. Remove the coolant from the cylinder block.

2. Put covers on journals of crankshaft for protection from dirt or water. 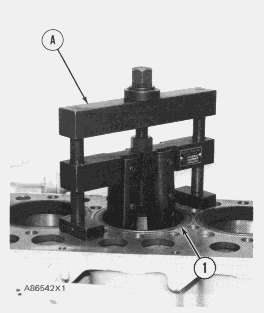 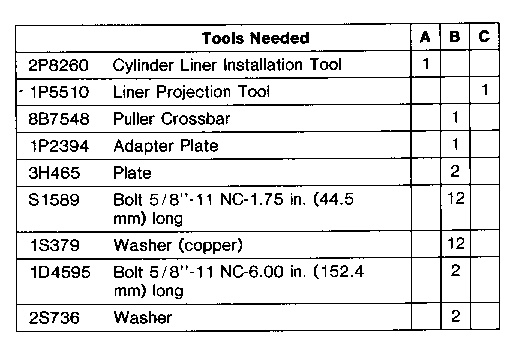 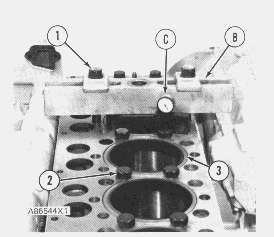 2. Install the cylinder liners in the block without the O-ring seals or filler bands.

c) Check to be sure the distance from the bottom edge of the crossbar to the top of the cylinder block is the same on both sides of the liner.

d) Check the cylinder liner projection with tool group (C) at four locations around the liner.

NOTE: If the liner is turned in the bore, it can make a difference in the liner projection.

5. When the cylinder projection is correct, put a mark on the liner and block so the liner can be installed in the same position from which it was removed.

NOTE: Cylinder liner projection can be adjusted by the removal of material from (machining) the contact face of the cylinder block with the use of the 8S3140 Cylinder Block Counterboring Tool Arrangement. Machine to a minimum depth of .030 in. (0.76 mm) and to a maximum depth of .045 in. (1.14 mm). The instructions for the use of the tool group are in Special Instruction Form No. FM055228. Shims are available for the adjustment of the liner projection. See CYLINDER LINER PROJECTION in TESTING AND ADJUSTING for the shim thickness and part number. 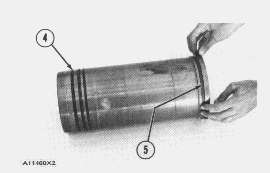 7. Put liquid soap on bottom liner bore in block, on grooves in lower liner and on O-ring seals (4). Install O-ring seals on the liner.

8. Put filler band (5) in clean SAE 30 oil for a moment and install on liner. Install cylinder liner immediately in the cylinder block (before expansion of filler band). 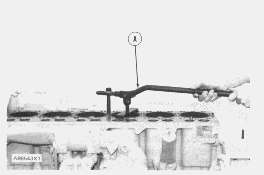 9. Make sure the mark on liner is in alignment with the mark on the block. Use tooling (A) to push the liner into position.

10. Do Steps 5 through 9 for the remainder of the cylinder liners.