The 5S5123 Hydraulic Testing Group is used to make the pressure test of the hydraulic system. Before any tests are made, visually inspect the complete hydraulic system for leakage of oil and for parts that have damage. For some of the tests, a timer and a measuring rule (either for inches or for millimeters) are usable tools.

To make an adjustment or make a repair to parts in the tank, it is necessary to remove the tank from the machine.

The two and three-valve systems have a series circuit arrangement. The hydraulic pump and the pressure relief valve are common to all circuits. Each circuit has a check valve to help prevent cylinder drift when the valve spool is first moved. The lift circuit also has a make-up valve to add tank oil to the pump flow when the bulldozer blade lowers faster than the pump oil can go to the head ends of the cylinders.

2. Lift, tilt, and ripper circuit drift is caused by leakage past cylinder piston seals, control valve seals, check or make-up valves and/or too much spool to valve body clearance.

A visual inspection of the hydraulic system and its components is the first step when a diagnosis of a problem is made. Stop the engine, lower the blade to the ground and when the oil is cool so any pressure in the tank will be at a minimum, make the inspections that follow:

1. Measure the oil level. Slowly turn the filler cap until it is loose to let the tank pressure lower before the filler cap is removed. Look for air in the oil in the tank.

3. Check all oil lines and connections for damage or leaks.

The difference between the pump flow of two operating pressures is the flow loss.

Flow loss when expressed as a percent of flow loss is used as a measure of pump performance.

Test On The Machine

Test on the Bench

If the test bench can be run at 1000 psi and at full pump rpm, find percent of flow loss using Formula I.

NOTE: The drift measurements in the chart are for new machines.

If a cylinder rod drift is too much:

1. Check the piston seals in the cylinder (bulldozer cylinder pistons also have plungers to check).

2. Check the condition of the valve stems in the control valves.

3. Check the make-up valve, on the control valve, in the head end circuit for the bulldozer. Cylinder piston seal (and/or plungers for the pistons in the bulldozer cylinders) leakage can be checked.

Lower the bulldozer enough to lift the front of the tractor off of the ground. With the control lever in HOLD position, disconnect the hydraulic line from the rod end of each lift cylinder. After only a few minutes only a very small amount of oil will run out of the rod end opening of the cylinder where the hydraulic line was disconnected. If oil flows out of the opening the seals and/or plungers are the cause of too much cylinder rod drift.

Move the control lever to FLOAT position and stop the engine.

Remove plug (1) from the elbow on the front of the hydraulic tank. Install a 3P3501 Adapter with a 4M5317 Reducing Bushing in the opening forplug (1). With 4M5317 Reducing Bushing and either 7S8714 Pressure Gauge or 1S8937 Valve and the pressure gauge on one end of 5S4648 Hose Assembly, install the other end of the hose in the reducing bushing in the elbow on the tank. 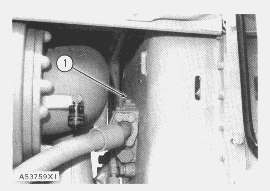 Bulldozer lift cylinders have pistons with plungers and the pump oil pressure can not increase to the pressure setting of the relief valve when the pistons are moved to either the rod ends or head ends of the cylinders.

Move the control lever to the FLOAT position and when the bulldozer is on the ground stop the engine. 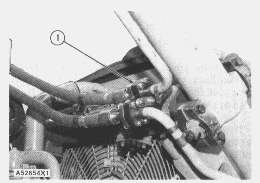 The relief valve is part of the control valve in the hydraulic tank. The oil in the tank must be drained and the front cover of the tank removed to get to the location of the relief valve. 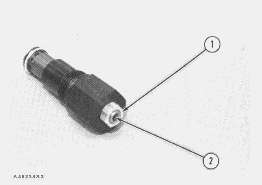 Install the cover on the hydraulic tank, connect the oil lines, connect the linkage for the control lever and fill the tank with the correct oil to the level of the gauge on the tank.